We Don‘t Do Weddings: The Band‘s Tale 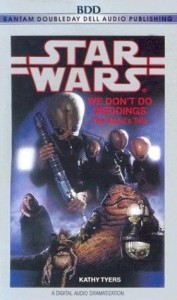 Nothing has stirred the world’s imagination like the Star Wars trilogy of films. Now, go beyond the scope of the trilogy, delving into stories that don’t end with the credits, and thrill to the further adventures of the wild and wooly characters from the famous Mos Eisley cantina scene in the original Star Wars film. This dramatic, digitally produced audio recording, loaded with original Star Wars music and full-stereo sound effects, brings the otherworldly outposts visited by the likes of Luke Skywalker, Han Solo, Darth Vader, and Jabba the Hutt vividly and unforgettably to life.

We Don’t do Weddings

Figrin Da’n and the Modal Nodes, bopping Bithians, members in good standing of the Intergalactic Federation of Musicians, were under exclusive contract to Jabba’s Palace. They were hoofing it up when Jabba’s arch rival sent E522, a recycled assassin droid, to make them an offer they couldn’t refuse.