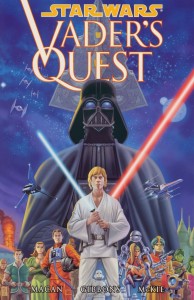 With the destruction of the Death Star, the Rebel Alliance has struck a critical blow against the forces of the evil Emperor Palpatine. And with the Senate dissolved and the Empire’s main tool of domination reduced to space dust, thousands of systems have joined their voices against the Empire. After Darth Vader’s narrow escape from the doomed Death Star, the dark lord is consumed with a desire to find the identity of the Force-strong young pilot, who had fired the fatal shot. For the young pilot represents the strength and tenacity of this newly galvanized Rebel Alliance, and perhaps, for Vader, he represents much, much more . . .