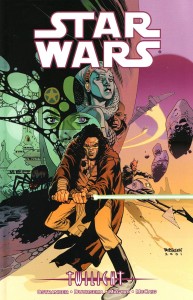 Jedi Knight Quinlan Vos has lost his memory. Not only must he fight to rediscover his past, he must also track down his Padawan, Aayla Secura, who has mysteriously disappeared. With only his lightsaber and a scheming Devaronian named Villie to help him, Quin must face off against deadly gamblers, false Jedi, corrupt officials, and the pull of the dark side if he is to survive! Twilight collects issues 19-22 of the ongoing Star Wars comics series and is Jedi Quinlan Vos‘ introduction to the Star Wars comics.