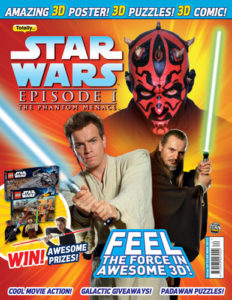 The 32-page official movie souvenir magazine is a must-have, will-sell-my-last-bantha-to-buy-one comic for any self-respecting Star Wars fan, featuring a galaxy of features, puzzles, and games. And to celebrate the movie’s exciting new dimension, it features ten pages in amazing 3D, including an all-new, all-action comic strip! There’s an eye-popping double-page 3D pull-put poster with some of the most iconic characters in cinema brought to life. Plus, there’s a chance for readers to win an official Darth Maul Double-Bladed Lightsaber!

Totally: The Phantom Menace goes 3D mad and brings to life the menacing red skin of Darth Maul and his deadly companion, the double-bladed saberstaff, in eight action-packed pages of exclusive 3D comic strip adventure! This never-before-seen comic introduces a new dimension of the Star Wars world. Vwooom! We see Anakin, still a slave boy, showing his speedy Podracing in Tatooine, while Darth Maul crushes battle droids and is trained up by the dreadful Darth Sidious. The spectacular action on Tatooine and Coruscant comes to life with the awesome FREE 3D glasses that come with every copy of the magazine.

Elsewhere, we look into Darth Maul’s past to shed some light on his dark powers. This mysterious menace gets unveiled as we delve deep into his background, from his origins as a Nightbrother to his rise as the force behind the darkness!