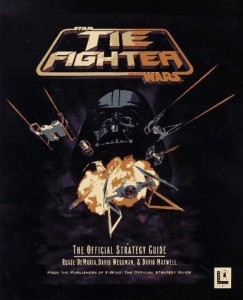 Luke Skywalker, Princess Leia, Han Solo, Chewbacca, the Wookiee, and the other characters you know from Star Wars are now the enemy, the Force has been helping those Rebel Alliance X-wing fighters for too long! As a young Imperial Navy Academy cadet, you must first train and then go into action against the Rebels and other enemies of the Empire to help ensure Imperial rule over the galaxy.

Written by the author of The Stele Chronicles, this handbook continues the story of Tan Stele’s adventures. TIE Fighter players learn every important detail as well as each strategy and tactic needed to succeed at the adrenaline-pumping missions.

TIE Fighter: The Official Strategy Guide is the ultimate resource for fans of LucasArts Entertainment Company’s hit game. Included in this book are: