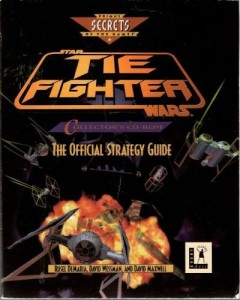 Seldom has space been this treacherous, as hordes of Rebels and renegade Imperial troops threaten to undermine the foundations of a glorious Empire. Now is the time for swift, decisive action. In your hands is the manual of tactics and inside information you’ll need to wipe away the traitorous scourge of the Alliance, and all who would challenge the Emperor’s rightful supremacy.

TIE Fighter Collector’s CD-ROM: The Official Strategy Guide is a must for those wishing to put down the Rebel pestilence once and for all. Now, you can gain the favor of Darth Vader, Dark Lord of the Sith, distinguish yourself in the service of the Emperor, and bask in the glow of the dark side.