Empire Volume 7: The Wrong Side of the War 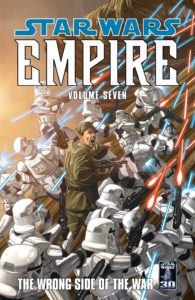 Fresh from the killing fields of Jabiim, where the Empire has virtually wiped out the populace of that world, Imperial Lieutenant Janek Sunber is sent to the quiet prison base on Kalist VI. But, unbeknownst to the Empire, the Rebels have designs on Kalist Base both for its desirable fuel supplies, and for the presence of a very important prisoner-one of their own who has already attracted the interest of Darth Vader.

Sunber doesn’t know it, but he’s on a collision course with an old friend who is with the Rebels, and he finds himself wondering which of them is on the wrong side of the war.