Jedi Apprentice 18: The Threat Within 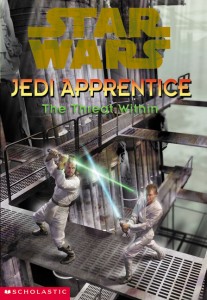 Peace over Anger
Honor over Hate
Strength over Fear

When Obi-Wan Kenobi started off as Qui-Gon Jinn’s Jedi apprentice, he was just a boy. Now, on the verge of manhood, he is starting on the path that will lead him to become a Jedi Knight…and the master of his own fate.

As Obi-Wan and Qui-Gon investigate a strange wave of planetary sabotages, they find their relationship shifting—sometimes in a dangerous direction. As events turn deadly, their lives may never be the same again.