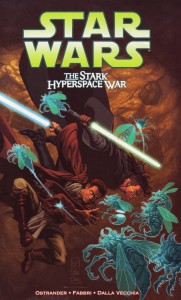 Before the outbreak of the Clone Wars, the Jedi were involved in another major battle: the Stark Hyperspace War. Smuggler and pirate Iaco Stark’s „commercial combine“ has disrupted the production of bacta, the most important healing agent in the galaxy. By cornering the market on bacta, Stark hopes to amass a fortune. But other forces within the Republic have aligned themselves with the Trade Federation, and are hoping to use Stark’s aggression as an excuse for military build-up.

It’s up to the members of the Jedi Council to untangle the many deceits and intrigues and bring the criminals to justice before the galaxy is plunged into war!