The Clone Wars: The Sith Hunters 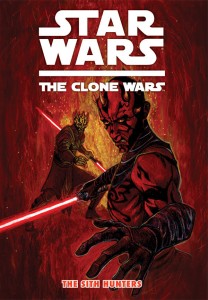 Would-be Sith Savage Opress has located his long-lost brother, Darth Maul! Now the two of them have embarked on a killing spree, cutting a deadly swath through the Outer Rim planets. Determined to stop the brothers, the Jedi Council sends a task force of skilled Jedi to hunt them down and bring them to justice. But when you’re hunting Sith, be careful . . . You might just catch them!