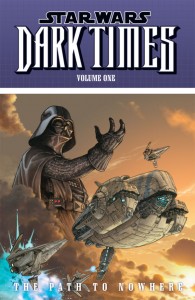 Jedi Dass Jennir and his companion Bomo Greenbark survived the Clone Wars, but the fate of Bomo’s wife and daughter remains a mystery. The two friends are determined to find them, but their path leads them from danger to darkness-where each of them stands to lose more than they may hope to gain.

Meanwhile, Darth Vader must deal with some unpleasant realities-and memories-of his own. Though he is a Dark Lord of the Sith, even he must bow before the power of the Emperor.