The Old Republic #6: Blood of the Empire, Part 3 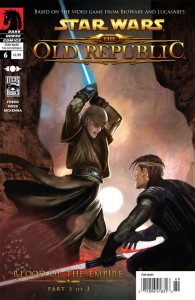 Teneb Kel is only steps behind his prey, the emperor’s apprentice, when light is finally shed on her dark plans. The foundling Sith Lord must find and face her one last time to uncover the secret behind her betrayal . . .