Jedi Apprentice 4: The Mark of the Crown 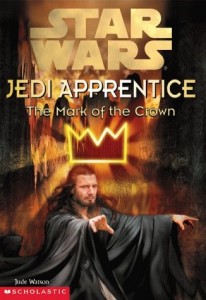 Peace over anger.
Honor over hate.
Strength over fear.

A queen is dying. Her angry son is conspiring to thwart his planet’s elections and maintain his rule. But he might not be her only heir. There may be another bearing the elusive Mark of the Crown.

Qui-Gon Jinn and young Obi-Wan Kenobi come to the planet of Gala as guardians of peace. Now they are facing a deadly battle for power and royal position.

The true heir must be found.

The Jedi must find the way.