The Making of Star Wars: Revenge of the Sith 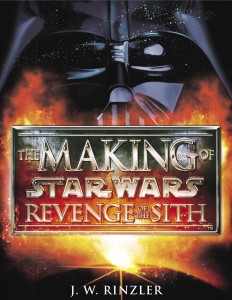 This is it–the climax of the greatest science fiction movie epic of all time, and Star Wars fans can venture behind the scenes for all the fascinating details. From the first story discussions to the final stages of post-production, The Making of Star Wars: Revenge of the Sith is an exclusive, unprecedented look at the crafting of the most anticipated and perhaps the most important Star Wars film ever.

Packed with hundreds of never-before-seen photos and interviews with the visual-effects teams, cast, and crew–including writer/director George Lucas and producer Rick McCallum–this outstanding volume offers a rare insider’s look at the complete creative process. Granted unprecedented access to all those involved at every stage of the film–from Skywalker Ranch to the sets at Fox Studios, Australia–author and Lucasfilm senior editor J. W. Rinzler captures in riveting detail the intense drama and cliffhangers that occurred as production worked day and night for three years to bring their monumental undertaking to conclusion. Readers will uncover

Finally, there’s the film editing–Lucas’s favorite part of the moviemaking process. This portrait of the legendary director captures the down-to-the-wire tension encountered in getting to the final cut. Fueled by his imagination and his beginnings as a documentary filmmaker, Lucas makes films the way some painters create canvases, building layer upon layer in each frame of the film. And this book takes the reader along for the ride.