Young Jedi Knights 3: The Lost Ones 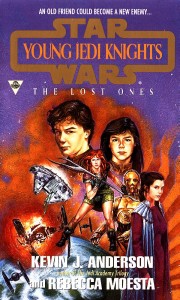 During a break in training, Jacen and Jaina are reunited with their old friend Zekk, an orphan living in the streets on their home planet of Coruscant. Young, wild, and free, Zekk has never had a care in the world…until now. He sees the changes in his friends. Jacen and Jaina have learned so much, have grown in so many ways. Compared to them, he is only a lost little boy.

However, a powerful being has seen his potential. Someone who knows about shame and jealousy—and how to make use of them. Someone who knows that the dark side of the Force is especially attractive when you’ve got nothing to lose…