Forces of Destiny: The Leia Chronicles & The Rey Chronicles 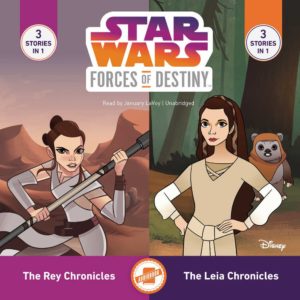 The choices we make, the actions we take, the moments — both big and small — shape us into Forces of Destiny!

Rey saves the day in three exciting adventures in the Star Wars galaxy!

Rey is strong, determined, and ready for anything. In these three stories she uncovers a threat to the Millennium Falcon, helps a hapless happabore, and crosses paths with a greedy Teedo. Rey’s choices, both big and small, show what it truly means to be a hero.

Princess Leia Organa is brave, is kind, and stands up for what is right. In these three adventures she undertakes a daring mission, makes some cuddly new friends, and protects and unlikely group of prisoners — Imperial stormtroopers! All of Leia’s choices, both big and small, show what it truly means to be a hero.