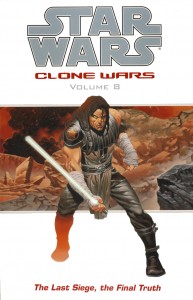 While both the Republic and the Separatists have suffered staggering losses during the Clone Wars, nothing could have prepared them for the battle they face on the desert world of Saleucami. Beneath the surface of this Outer Rim planet, the Dark Jedi Sora Bulq has begun cloning an army of Morgukai assassins. Unwilling to leave this grave new threat unchecked, the Jedi and their armies soon find themselves entrenched in a five-month siege. Now, time and resources have run out, and it’s up to a crack team of Jedi, led by Quinlan Vos and Aayla Secura, to infiltrate the Separatist base.