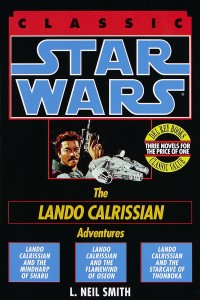 RISK IT ALL WITH LANDO CALRISSIAN IN THIS THRILL-A-MINUTE TRILOGY!

LANDO CALRISSIAN AND THE MINDHARP OF SHARU
Gambler, rogue, and con artiste, Lando Calrissian was more comfortable at the dealer’s end of a fast shuffle than at the rear end of a blaster. So he always had his sensors scanning for the chance to pick up easy credits–and when he heard that the planets of the Rafa System were practically buried in ancient alien treasure, he hopped aboard the Millennium Falcon, never stopping to think that someone might be conning the con man…

LANDO CALRISSIAN AND THE FLAMEWIND OF OSEON
The Oseon was a solar system of luxury hotels catering to the underemployed filthy rich–every gambler’s dream come true. And so it was for Lando Calrissian and his robot companion until Lando broke the gambler’s cardinal rule: never beat a cop at high-stakes games of chance…

LANDO CALRISSIAN AND THE STARCAVE OF THONBOKA
For a year Lando Calrissian and Vuffi Raa, his five-armed robot astrogator, had roamed space in the Millennium Falcon, on the lookout for opportunities to turn an easy–but not too dishonest–credit. But then Lando had gone out on a limb to help a race of persecuted aliens, and now he and Vuffi were up against several sets of their own enemies–including the evil Rokur Gepta, the Sorcerer of Tund!