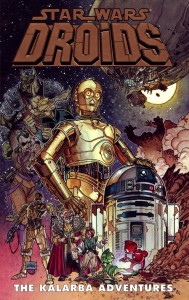 Years before the events of Star Wars: A New Hope, Artoo-Detoo and See-Threepio journeyed to the Kalarba system where they encountered the notorious Olag Greck for the first time. After Artoo and Threepio were acquired by the Pitareeze family, the droids found themselves in a series of misadventures with pirates, bounty-hunters, and rock monsters! These stories brim with the wonder and whimsy that made the characters so popular in the films, as Artoo and Threepio do their best to stick together in an often dangerous galaxy.

This volume collects the three chapter serial (featuring bounty-hunter droid IG-88) from Dark Horse Comics #17-19, Droids #1-6, and the 8-page story first published in Topps Star Wars Galaxy magazine. It includes all of the original cover art and is wrapped in a new foil-enhanced cover by Kilian Plunkett!