The Join the Resistance Series 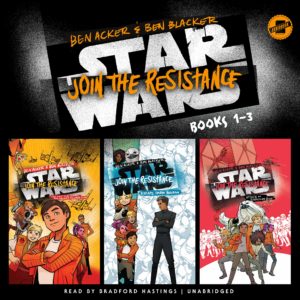 Join the Resistance (Book 1)
Mattis Banz knows that he’s meant to be a hero of the galaxy like the legendary Luke Skywalker, and when General Leia Organa’s Resistance recruits him to join its efforts against the evil First Order, he finally has a chance to fulfill his destiny. But the rest of his squadron doesn’t seem very promising. Sure there’s the Zeltron girl Lorica, famous for her exploits foiling evil smugglers, but there’s also the swamp boy named Dec, who seems to enjoy causing trouble; Dec’s „“brother,““ a droid who thinks he’s a pilot; Sari, whose imposing size contradicts her sweet nature; and Jo, the stuffy group leader with secrets. How is Mattis supposed to be the next Poe Dameron when he and his squad mates spend more time in trouble than flying X-wings? The team will have to learn how to work together when the going gets tough, or they won’t be going anywhere.

Escape from Vodran (Book 2)
Mattis, Lorica, AG-90, and Jo have been captured by the First Order! And things only go from bad to worse when Jo turns traitor on them as soon as they’re in custody and AG is taken away to be reprogrammed as a villainous First Order droid! Can the squabbling Mattis and Lorica work together to figure out a way to escape before they are interrogated–or worse? Meanwhile, Dec and Sari seek out the help of the intimidating gangster Harra the Hutt to save their friends, but bargaining with a Hutt brings its own set of problems. The members of J Squadron will need quick planning and even quicker moves if any of them are going to survive!

Attack on Starkiller Base (Book 3)
The members of J Squadron are at it again, fighting the First Order and trying desperately to be as cool as Poe Dameron. Having escaped the First Order, this ragtag group is on the run–and trying to get back to the Resistance before it’s too late–in the third book of this hilarious Star Wars-meets-The Goonies original fiction series.