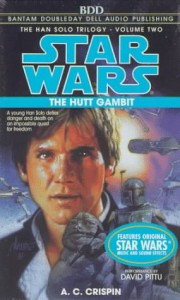 The exciting new Han Solo series continues! The Hutt Gambit tells us even more about that dashing rogue adventurer, Han Solo! In Book Two, Han is a fugitive from the Imperial Navy where he was once a promising recruit. Han is also running from dreaded bounty hunter Boba Fett. But with his new friend, a Wookiee named Chewbacca, Han offers his smuggling services to crime lords Jiliac and Jabba the Hutt–and now the pair is caught in the middle between the Empire and their outlaw allies.