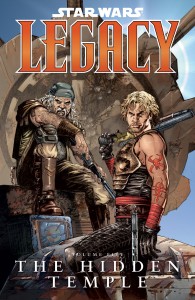 Cade Skywalker just wants to be left alone. But when you and your friends have just blown up half of the Sith Temple, cut down two of Emperor Darth Krayt’s most trusted minions, and you happen to be the last known heir of the Skywalker legacy, people–bad people, and lots of them–are going to come knocking.

The Empire’s retaliatory genocide on Mon Calamari is just the icing on the cake. Cade and his bounty-hunter band realize that something must be done! If only there was somebody to help Cade save the galaxy and get the Sith off his back. Maybe a bunch of Jedi?

The secrets of the Hidden Temple are revealed-along with a spy who was once a friend!