Tales of the Jedi: The Golden Age of the Sith #5: The Flight of Starbreaker 12 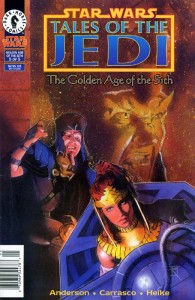 Gav and Jori Daragon knew they could be killed in their chosen line of work — mapping out uncharted hyperspace flight paths could easily result in a deadly meeting with an unexpected meteorite shower or an unknown world. But it’s neither comets nor planets that threaten them now. Rather, it’s their success that may cost them their lives. They’ve successfully mapped a hyperspace shortcut — a shortcut which could prove strategically imperative in the event of war. And war is just what Gav and Jori have found themselves in the middle of. Trapped between two factions of the Sith, each vying for control of the galaxy, this sibling duo of hyperspace pioneers has become a pawn to the dark side of Sith magic.