Tales of the Jedi: The Golden Age of the Sith #3: The Fabric of an Empire 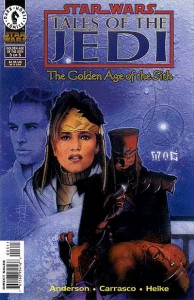 When Gav and Jori Daragon set off to map the uncharted regions of hyperspace, they knew they were risking their lives. But they thought it would be an unsuspected cluster of debris that would take them out of the game, not their successful discovery of a series of hyperspace „short cuts.“ The Sith Empire wants to know where these routes are — wants to hold the only map to these routes — so that it can maintain an iron grip on the galaxy. And the lives of a couple of explorers mean very little to these masters of the dark side of the Force.