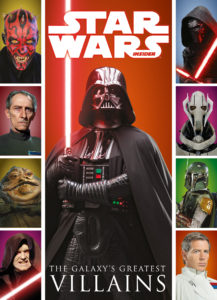 Curated from the pages of Star Wars Insider, go behind the scenes to discover how the most terrifying Star Wars villains were brought to the screen in this incredible collection of in-depth interviews and articles.

The actors and filmmakers behind 15 of Star Wars‘ most popular villains discuss the process behind creating some of the most iconic characters in cinematic history. Includes David Prowse (Darth Vader), Ray Park (Darth Maul), and Ian McDiarmid (Emperor Palpatine), with input from George Lucas (the creator of Star Wars), Lawrence Kasdan (writer: The Empire Strikes Back, Return of the Jedi and The Force Awakens), J.J. Abrams (writer, director: The Force Awakens and The Rise of Skywalker), to name just a few.