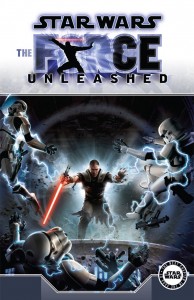 LucasArts‘ game The Force Unleashed, is poised to be the Star Wars event of the year. The game-play promises to be stunning, but we think it’s the story that will blow you away.

Revealed here are the origins of Darth Vader’s secret apprentice, the deadly missions on which he was sent to track down and destroy Jedi, and the awesome decision he is forced to make that will, literally, change the way you look at the Star Wars saga!

Scripted by the game’s author, Haden Blackman, this graphic novel can be enjoyed alone, or as a companion to the amazing new game.

The Star Wars graphic novel of the year!