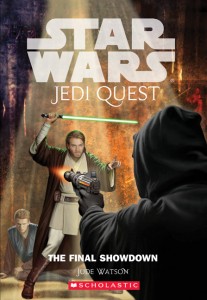 Granta Omega is an evil mastermind who has one goal: to help the Sith destroy the Jedi Order. Now Omega has escaped to the planet of Korriban—home to the tombs of the ancient Sith Lords and their terrible secrets. Obi-Wan Kenobi and Anakin Skywalker must stop him before his sinister power grows out of control.

They are not alone on this mission. Anakin’s rival, Ferus, is also searching for Omega, and Anakin sees this as a contest he must win. But as the dark side of the Force becomes stronger and stronger, there is only one guaranteed outcome for any showdown: