Tales of the Jedi: The Fall of the Sith Empire #2: Forces in Collision 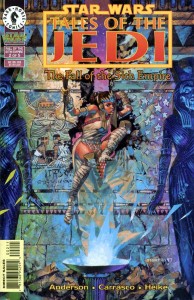 The Sith Empire has rallied its forces for an all-out battle for control of the galaxy. Their goal: Crush the Republic. And with so many Sith masters amongst them, the goal is not unachievable. As Naga Sadow readies his fleet to attack, one lone person threatens to undermine the entire campaign — Jori Daragon. She isn’t a Jedi. She doesn’t come from a military background or have a history of fighting. She’s an explorer, a mapper of hyperspace who stumbled on the plans of the Sith. And she just may be the savior of the Republic.