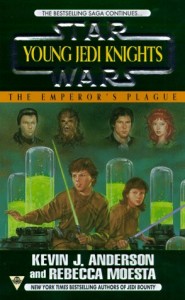 When the Galactic Empire died, they were born—a new hope for the New Republic. The young twins of Han Solo and Princess Leia have taken their first steps as Jedi Knights, defeating the evil minions of the Shadow Academy. Now, with their friends Tenel Ka and Lowbacca the Wookiee, the future heroes of an already legendary saga continue their training.

Bornan Thul’s secret is out: he’s been protecting a deadly plague that could devastate the galaxy if released. And the evil Nolaa Tarkona—leader of the Diversity Alliance—knows where it is hidden.

Now Jacen, Jaina and their allies must race against time. As a massive battle rages between New Republic soldiers and the forces of the Diversity Alliance, the young Jedi Knights must find and destroy the plague before it can be released.

But they first must face Nolaa Tarkona. And her very lethal hired hand, Boba Fett.