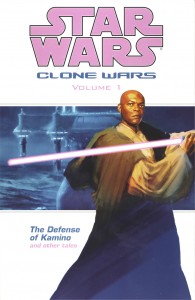 The Clone Wars have begun! Ever since they were mentioned in the very first Star Wars film, fans have been dying to know more. Attack of the Clones offered a glimpse, but The Defense of Kamino brings the galaxy-wide conflict into full view!

Two undercover Jedi discover a Separatist plan to destroy the cloning facility on the watery world of Kamino, thus crippling the Republic’s ability to maintain their clone army. Obi-Wan Kenobi and Anakin Skywalker are part of a Jedi fighter squadron sent to protect the installation, but they learn that there are heroes fighting for the Separatist cause as well as for the Republic, and that Jango Fett, though dead, still has something to say about how this war is fought! Meanwhile, Mace Windu, the leader of the Jedi Council, must deal with a rift in the Jedi ranks–a matter that reveals a Jedi traitor and a new Dark Jedi working in league with Dooku. Mace is considered one of the best swordsmen in the galaxy, but can he stand up to the swordmaster who taught him everything he knows–including the mysterious techinque known as „Vaapad“?

New characters and new worlds are revealed as the Clone Wars spreads throughout the galaxy!