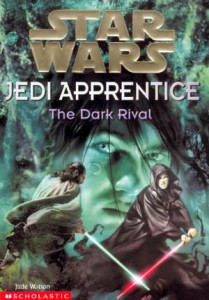 Peace over anger.
Honor over hate.
Strength over fear.

Qui-Gon Jinn’s past is not at rest. How can he forge a bond with young Obi-Wan Kenobi while he is haunted by the betrayal of his first apprentice—Xanatos? Xanatos was also a promising student—until the dark side of the Force intervened. Qui-Gon thought he was gone forever.

But now Xanatos is back.

And he wants revenge.