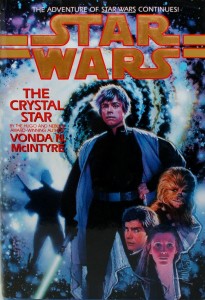 First Timothy Zahn reopened the door to George Lucas’s dazzling universe with his New York Times-bestselling Star Wars trilogy. Then Kathy Tyers’s The Truce at Bakura took readers back to the fateful days following the events in Return of the Jedi. And with The Courtship of Princess Leia Dave Wolverton chronicled Han Solo’s turbulent campaign for the princess’s hand. Now, award-winning author Vonda N. McIntyre continues the tradition as the ultimate space adventure unfolds in The Crystal Star.

Princess Leia is dealt a crushing blow when her three children–Anakin and the twins Jaina and Jacen–are kidnapped. Leia’s advisers counsel her to wait for a ransom note, but waiting is the hardest thing for a mother to do when her children are in danger–and worse than waiting is her discovery that she cannot sense her children through the Force.

Ultimately, the princess has no choice. She, Chewbacca, and Artoo-Detoo track the kidnappers, following their trail to a disabled refugee ship where the answers provided by Rillao, a mysterious fugitive, only provoke more questions. The refugees‘ children are also missing–and Rillao thinks she knows who has them: a powerful Imperial officer named Hethrir who has his own twisted plans to restore the Empire to its former glory.

Meanwhile, Han Solo and Luke Skywalker are on a separate mission to the planet Crseih to investigate a report of a lost group of Jedi. Crseih is at the mercy of strange quantum effects caused by the death of a nearby star that is slowly freezing into a uniquely perfect crystal. This crystal star causes a disruption in the Force, blunting Luke’s power and cutting the Millennium Falcon off from Leia and their home base. What Han and Luke find on the planet is even stranger than a crystallizing sun: a charismatic alien named Waru who has attracted a following of fanatic devotees through his miraculous healing powers. Is Waru a being of benevolence? Or do his healing arts conceal a darker purpose? As Leia, Chewbacca, and Rillao follow Hethri trail of treachery across space, Luke and Han draw closer to the truth behind Waru‘ sinister cult. Ultimately they will face an explosive showdown that could determine not only their own fates and the fate of the New Republic but whether the universe itself will survive.