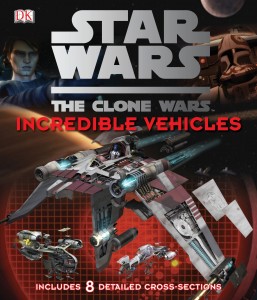 First we gave you a series of Cross-Sections books to show you the dynamics of the iconic vehicles from the classic Star Wars® films. Now with the introduction of the Clone Wars™ fleet, DK is bringing our fantastic Cross-Sections format — updated with new computer-generated artwork — to this brand new fleet of craft as featured in the hit CG animated TV show Star Wars®: The Clone Wars™.

Star Wars® The Clone Wars™: Incredible Vehicles features astonishing detail of the spacecraft, aircraft, and landcraft developed by the engineers on both the Republic and Separatist sides. Peel away the outer panels to reveal the inner components, the weapons systems, and the construction secrets of this wider world of vehicles.