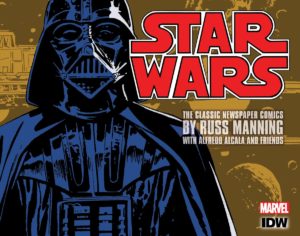 This is the first of three volumes that collect the Star Wars newspaper strip from 1979 through 1984. included are every Sunday’s title header and “bonus” panels in meticulously restored original color, making this the first-ever complete collection of this comics classic.

When the strip launched, Russ Manning accurately predicted that “People today can’t get enough science fiction, especially if it is original and full of creative adventure. The Star Wars characters are like Mickey Mouse. They will be loved forever.” Initially the color Sundays and black-and-white dailies told separate stories, but within six months the incomparable Russ Manning and company merged the adventures to tell brand new epic seven-days-a-week sagas that rivaled the best science fiction comics of all time.