Jedi Apprentice 16: The Call to Vengeance 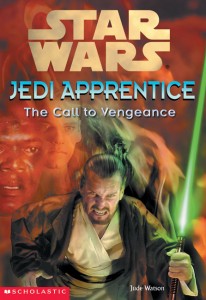 Peace over Anger
Honor over Hate
Strength over Fear

Qui-Gon Jinn is a man on the edge. His heart has been shattered. His beliefs have been destroyed. And now he is dangerously close to stepping over a line that no Jedi dares to cross.

His fellow Jedi—his apprentice Obi-Wan Kenobi, and Jedi Council member Mace Windu—will try to stop him. But when Qui-Gon strikes out on his own, anything can happen. Revenge is not a Jedi trait…but it is a Human one. Can Qui-Gon separate his personal feelings from his Jedi training?