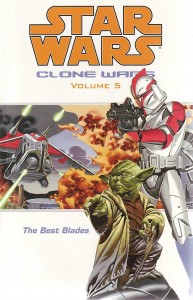 „Try us all, these times do. In this war, unsheathed must all of the Jedi’s blades be. Survive constant use, even the best blades cannot.“
–Master Yoda

The darkest days of the Clone Wars have arrived, when even victories are cause for abiding sorrow; when the hopes for a brighter future are lost in the turmoil of a divided galaxy; and when friendships are tools of convenience and the reason for betrayals. From political intrigue within the Senate to bloody battlefields on exotic worlds, the war has left its mark on the bystanders as well as the combatants, and the events in this wide-ranging volume reveal the extent of the damage.

Obi-Wan Kenobi and Anakin Skywalker battle for survival, Senator Bail Organa struggles to preserve freedom within the Republic, and Master Yoda strives to prevent an old friend from plunging a system into war in four exciting stories from the Clone Wars!