The Empire Strikes Back: The National Public Radio Dramatization 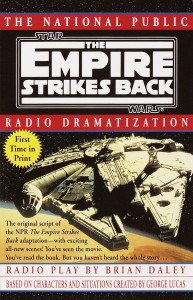 The Empire Strikes Back movie followed the Rebel Alliance and the Empire through a struggle that crossed the galaxy, but the NPR dramatization will reveal scenes the movie never showed you…

The ten episodes of this original radio dramatization script contain exciting new scenes and extra information on the events of the second installment in the acclaimed Star Wars series, which has become part of our modern mythology. And behind-the-scenes details come to light in an informative introduction by the script’s author, Brian Daley—who wrote the episodes, reworked scenes on the spot in the recording studio, creating the National Public Radio dramatization broadcast on stations nationwide.

The story of The Empire Strikes Back comes to life again in these original scripts—this time with more background, more scenes—more Star Wars!