The Old Republic: The Lost Suns #4 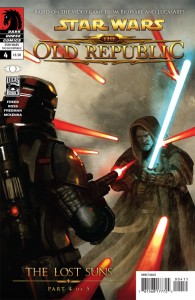 The war that ended in a tense peace agreement is in danger of beginning again, but elite Republic spy Theron Shan is going to do everything in his power to prevent it-including infiltrating the Imperial space of Darth Mekhis to find out what is happening! Along with Master Zho, and the criminal in his custody, Teff’ith, Theron is headed to Port Nowhere. He hasn’t got a plan or any idea what he may be going to face, but for a spy, he’s got great style!