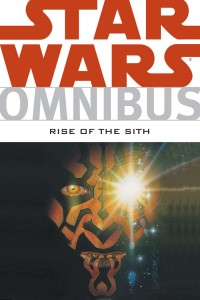 Before the name of Skywalker–or Vader–achieved fame across the galaxy, the Jedi Knights had long preserved peace and justice . . . as well as preventing the return of the Sith.

Collected in this newest Star Wars Omnibus are tales leading up to The Phantom Menace. First–previously uncollected and out of print–Qui-Gon Jinn and his Padawan Obi-Wan Kenobi save a sinking ship in The Aurorient Express and investigate an unexpected death in Last Stand on Ord Mantell. The origins of bounty hunter Aurra Sing are revealed in Aurra’s Song. Then, in Jedi Council and Prelude to Rebellion we follow two key Jedi Masters, Mace Windu and Ki-Adi-Mundi as they face new foes that will try the Jedi ways to the very limit. And finally, in Darth Maul, the terrifying Sith apprentice leaves a trail of death in his efforts to keep the secrets of his Master.