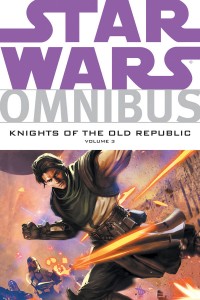 Free from the false charges against him, former Padawan Zayne Carrick discovers that one of his allies, Jarael, has been running from her past. Soon Zayne is caught in a web of sport dueling, slavery, an evil twin, an ancient society, and finally, the frontline of the Mandalorian Wars. Collects Knights of the Old Republic #38–#50 and Knights of the Old Republic—War #1–#5 (part of volume 7 and volumes 8–10).