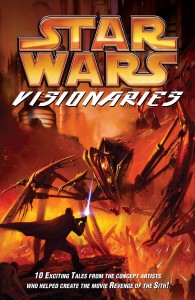 They’ve been responsible for some of the most dazzling and awe-inspiring visuals ever put to film, and now the concept artists, behind the Star Wars prequels are bringing their considerable talents to comics.

Just in time for Star Wars: Episode III, the wildly gifted minds of the Lucasfilm art department and visual effects powerhouse Industrial Light & Magic come together to tell their own Star Wars tales in this compilation of short stories. Given free reign to explore any and every aspect of the Star Wars universe, each artist offers a new twist or a deeper view into that galaxy far, far away. Nowhere else will you find a more pure or more different look at George Lucas‘ enduring creation than through the eyes of the Star Wars: Visionaries.