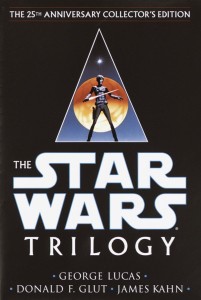 Twenty-five years after the phenomenon was born, Star Wars remains one of the greatest fantasy sagas ever told. Here is the original, complete Star Wars trilogy, featuring the novels of all three classic films, Star Wars: A New Hope, Star Wars: The Empire Strikes Back, and Star Wars: Return of the Jedi. Read these stories and rediscover the wonder of the epic that begins:

Luke Skywalker lived and worked on his uncle’s farm on the remote planet of Tatooine. But he yearned for adventures out among the stars — exotic travels that would take him beyond the farthest reaches of the universe to distant, alien worlds. But when Luke intercepted a cryptic message from a beautiful, captive Princess, he would be catapulted into the adventure of a lifetime.

Luke Skywalker, the proud Princess Leia, and headstrong Han Solo . . . merciless Darth Vader, wise Obi-Wan Kenobi, loyal droids R2-D2 and C-3PO, and the inscrutable Yoda . . . Chewbacca the Wookiee, shifty Lando Calrissian, and the vile Jabba the Hutt — all the vivid characters from the Star Wars universe spring to life in these thrilling pages.

The Star Wars Trilogy is a must-read for anyone who wants to relive the excitement, the magic, and the sheer entertainment of this legendary saga — now and forever.