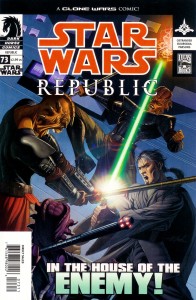 With Aayla Secura’s help, Jedi Master Tholme has uncovered a Separatist plot that could drastically alter the Republic’s fortunes in the Clone Wars – for the worse!

Anzati assassins are feared throughout the galaxy for their deadly cunning and stealth. Their only rivals were the now defunct cult of Morgukai assassins, whose strength and sheer tenacity made them dangerous adversaries even for the Jedi. Now, unexpectedly, the Morgukai are back-and in numbers not seen for hundreds of years. Worse, they are being trained by Anzati masters, and working for Count Dooku!