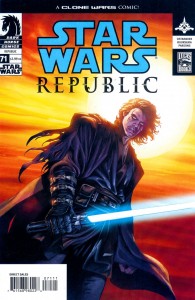 The action is fast and furious as the Jedi pull out all stops to prevent the Separatists from commandeering the mighty Rendili Fleet.

Anakin Skywalker and renegade Jedi Quinlan Vos team up in their starfighters, Vos is finally captured and broght to justice for his crimes, and Anakin has what he hopes will be a final showdown with dark Jedi Asajj Ventress high above the dark alleys of Coruscant!

Against the backdrop of the Clone Wars, dark deeds are made to seem right, so that even a Jedi might condone revenge!