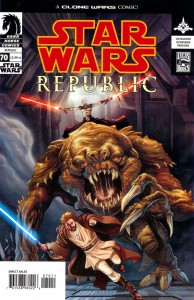 Futineers have taken hostages and are planning to turn over a fleet of Republic warships to the Separatists. Despite the fact that one of the hostages is his friend, and fellow Jedi Council member Plo Koon, Saesee Tiin believes that destroying the fleet may be the only hope of saving the Republic. But Anakin Skywalker has a plan. The plan calls for daredevil flying, split-second timing, and an untested new weapon-so, of course, Anakin is sure of success!

Meanwhile, trapped on a derelict research ship carrying many dangerous species of animals from around the galaxy, Obi-Wan faces his most hated enemy-alone!

Featuring a guest appearance by a character well-known to fans of the original Star Wars films!