Republic #50: The Defense of Kamino 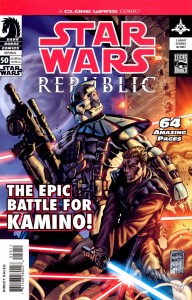 Two months after the Battle of Geonosis…with the forces of the Republic and the armies of the Confederacy of Independent Systems stalled in a series of indecisive battles, the Separatists risk a devastating strike at the heart of the Republic’s war machine: they attack the cloning facility on Kamino! Their hope is to permanently destroy the Republic’s ability to create new clones for its army. The Republic’s defense rests on a squadron of Jedi Starfighters and a battalion of Jedi-led clone troopers within the facility itself. It’s a battle fought on three fronts — in space, on the ground, and underwater! A massive 64-page battle epic!

Star Wars: Republic reveals events in the time period between Episode II and Episode III — the Clone Wars! If you’re wondering what happens next after Attack of the Clones, this is where you find the answers!