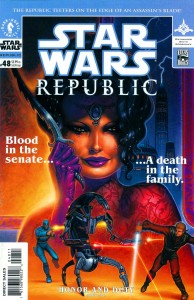 Obi-Wan and Anakin’s lightsabers are working overtime as they are confronted by assassins on all sides — a beautiful princess with a penchant for deadly toys and exotic martial arts; a radio-pathic alien with specially-constructed battle droids; and a crazed Dug on a speeder bike. Meanwhile, the two Senate Guards assigned to the case are making disturbing discoveries about the person who hired the assassins. For one of the Guard’s, „family ties“ may be a noose that drags him to death and disgrace!