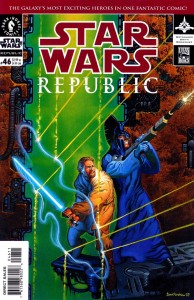 An important Senate vote is immanent, and a Senator from a small system is suddenly in possession of two things he never expected to have: the power of a „swing“ vote, and a death threat! At the insistence of the Supreme Chancellor, Jedi Knight Obi-Wan Kenobi and his Padawan Anakin Skywalker are ordered to help protect the Senator — along with the Senator’s regular team of Senate Guards. Ordinarily, four stalwart protectors would be more than enough to ensure the Senator’s safety, but as the Jedi and the Guards discover, this situation is far from ordinary… Star Wars: Republic, and its sister title Star Wars: Empire, are now the flagships for Star Wars continuity comics!