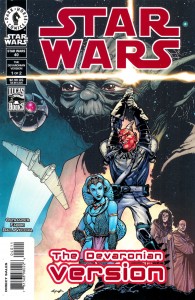 There’s an ugly rumor making the rounds in the squalid cantinas and dives in the lowest levels of Coruscant. They’re saying that Vilmarh Grahrk has gone soft, that he’s working with the Jedi, that Villie has gone…legit. Our Devaronian rogue wants to set the record straight and he gives HIS somewhat jaundiced side of what has happened. The Devaronian Version, first of two parts, is a fine place for new readers to come on board as well as setting the stage for the next year of stories. Oh, and if you actually BUY his side of the story, Villie has a nice moon called Nar Shaddaa that he would LOVE to sell you!