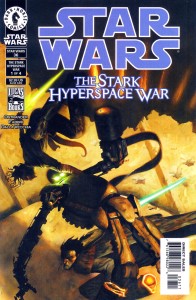 During a time of conflict, the galaxy’s supply of bacta, used to treat the sick and injured, runs dangerously low making the existing supply highly valuable. The charismatic and bold Iaco Stark brings together a conglomeration of pirates and smugglers to form the Stark Commercial Collective. Their goal: liberate the existing supplies of bacta for the Outer Rim colonies. Intrigue and treachery abound until Senator Valorum arranges to bring in the Jedi to negotiate peace between the Republic, the Trade Federation, and the Stark Collective. Before talks can begin double-crosses are already being planned. But what exactly is the trap and who will fall victim? Don’t miss out on this first issue in a new story arc which tells how Plo Koon became a permanent member of the Jedi Council!